A downloadable game for Windows, macOS, and Linux

1365 will return to PWYW in the future, but I'm temporarily giving it a minimum charge! All money raised through this game is going towards BEAM (Black Emotional and Mental Health Collective)

Visit 1365 on GitHub!
Please let me know if you find any bugs!

Hello. My name is Anxiety. Here, on your shoulder. This is your first day of high school.
You don't belong here.

In the dim, abandoned halls of the school, there are monsters - monsters with names like Guilt and Dysphoria, Insomnia and the Expectations that you can't seem to clear. With no clear way to leave, no way to get rid of the monsters, and no one to help, things are looking pretty bleak. The Anxiety that accompanies you sure seems to think so.

But remember, even in the darkest of places, you can't let your hope die. It's okay to get hurt, and it's okay to fall. And, most importantly: never give up.

In 2016, just before I graduated from high school, I was asked to make a presentation on my last 1365 days at the school. I realized that I couldn't really remember, thanks to my many mental illnesses. So, instead, I made a game about what I could remember: a hostile world, bleak and full of inescapable monsters, but a world that I had just made it out of in one piece. 1365 is a reflection of my own struggles in overcoming Anxiety, Depression, and other such monsters of the mind, specifically in the context of public school.

While my understanding of myself and my world have changed drastically since I first started working on this game, I opted to keep the original concept intact. I've remade the original game entirely and added a few features that I didn't have time for, but otherwise the game is a time capsule to three years ago, when I finished its first incarnation.

Nearly every part of 1365 was made by me, including graphics, sound, code, writing, and concept. The only parts that weren't are the fonts (the main one is Little Monster by Jack Oatley), and the game engine itself, built by the Godot team. I couldn't have done it without them.

So, three years after its initial creation, I'm proud to present: 1365. I hope you enjoy playing it as much as I enjoyed making it!

In order to download this game you must purchase it at or above the minimum price of $1 USD. You will get access to the following files:

Thank you for this, I thought it was a lovely little 2D platformer. I can completely relate to trying to push forward even when the little voices in your head are telling you that you can't.

A short game that will struck a cord with any person who has suffered from mental illness. The grueling past through highschool and college is all too well exemplified in the monsters that roam the halls, and as someone who also does not remember anything of their teenage years it was a very emotionally rewarding experience.

Reply
Pastels-for-days283 days ago
Made a lil playthough of this game. I enjoyed it.

Thank you for making this game :]

You did such a great job of illustrating the mental 'monsters'. There was also a point where it tells you, "you can't jump that high, so don't even try." and because I initially missed the jump I actually believed the character wasn't able to jump that high and almost gave up, which really struck a chord with me. The scene with the depression hall was also really good. thanks for making this!

thank you for making this game

It's day 1092 and the character is a freshman. Is this a mistake?

I really needed this message, thank you for making this and hope you are still fighting!

Awesome game, very much spot on. I'm glad there was an option to change the font, because while I love the aesthetic of the default font it's really hard to read for me. The only problem is that when reading the 'about' page the last line in some of the paragraphs overlapped with the preceeding line.

This game really hits the mark, I was really impressed by how real Anxiety feels. This was one short hell of a ride!

i dropped out in freshman year because my anxiety and inability to focus doomed me to fail all of my classes. i spent the next few years in a horrible depressive state, and im barely going to be a senior soon. this is so so accurate; even if its a short game, it feels like the past three years of my life were explained in such a beautiful and encouraging way. i loved everything about the game! thank you so much for making it

This is failing to install for me on Linux using the itch.io client.  The Install button spins for a moment and then stops without changing to 'Launch'.  No error that I can see. The installer creates an empty 1365 directory in itch/apps.  The game itself runs fine when downloaded manually.

That's strange! Thanks for letting me know, I haven't really used the itch app before so that slipped past me. I'll run some troubleshooting to see what I can do!

I personally avoided this whole high school thing by dropping out but heard about it through others. It's a bit tragic but you ended up making a fine ass game. Here are some things you could have done better (in the game):

The color scheme and general palette was very disorienting, if that was the vibe you were trying to shoot for you nailed it.

The font was not accurately displayed in the game. You need to change the font settings. I'm a Godot Dev and you just learn it by playing around with random things in-engine and hovering / going to docs when you need extra help. (hold Ctrl and click on a method to get it's documentation!)

That's pretty much it. I could really feel the suffering through the music, visuals, and Gameplay. The little voice in your head thing was especially heartbreaking and a fantastic way to storytell. 8/10

Hi, thanks so much for playing! I really appreciate all the feedback ^^ Could I ask what you mean by the font not being accurately displayed? (OS info would also be helpful! I've only been able to test the game on Windows + Linux myself, so the Mac version is a bit of a shot in the dark)

i'm on windows. the font was blurry

I found this amazingly bang on.  Thank you so much for creating this. 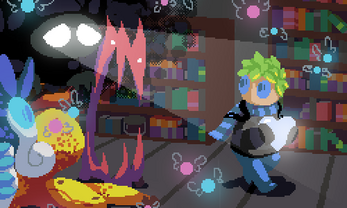